Every once in awhile we find items we would love to have, I venture onto Ebay and look once or twice a week—sometimes they're bargains, sometimes they're not, but our avian obsession drives us. Just recently I found one of those objects... The bidding started at $1400 and ended at $3600, I keep saying—I wish I had the money! 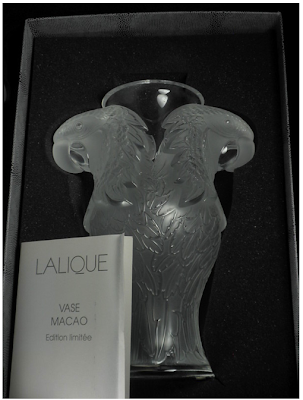 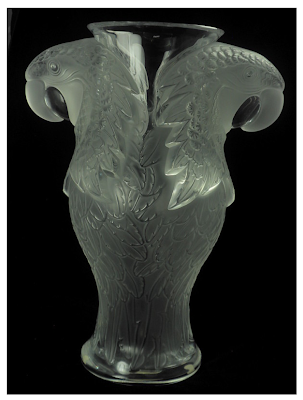 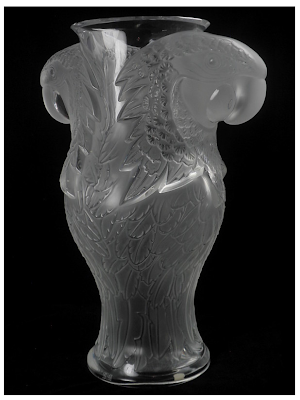 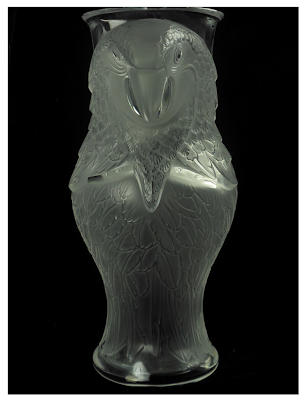 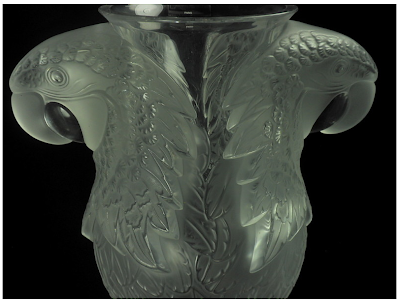 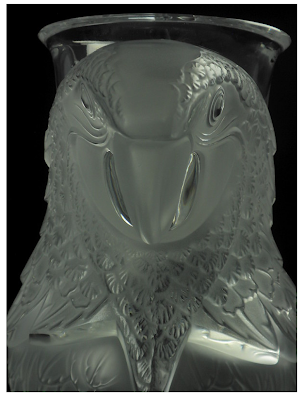 Height: 13". Width: 9". Weight: 15 lbs. The one Macaw Vase comes with a Certificate of Authenticity signed by the president of Lalique and hand-numbered as #94 of 99 exemplars in clear crystal.

"Building on the rich heritage of company founder and visionary Rene Lalique, Lalique today returns to the natural world as a source of inspiration. The tropical jungle is home to the fiery Macaw, the namesake and inspiration for Lalique's 1999 Limited Edition Macaw Vase."

"The commanding Macaw Vase features two magnificent Macaw heads, plumage shining, extending from either side of the vase. Delicate plumage, sculpted in satin-finished crystal, covers the body of the vase. The shape of the vase further evokes the exotic Macaw: it curves and tapers, echoing the shape of the bird's own body."

"Lalique's master artisans pay tribute to the myth of the Macaw, considered to be a symbol of solar energy, by depicting the bird in five brilliant colors: red, jade, green, turquoise, amber and clear. The bird's satin-finished color complements the luminous clear finish of the vase, making the Macaw Vase as radiant as its natural counterpart."

"Standing over 13 inches tall, with a width of 9 inches, and weighing nearly 15 pounds, the Macaw vase is a dramatic representation of an inspiring creature."

"Because of the complex nature of of its production, only 99 Macaw vases will be produced worldwide in each of the five colors. Each Macaw vase will be a hand-numbered, limited edition."
Posted by —RS at 7:27 PM No comments:

Welcome to the Confessions of a Crazy Parrot Person!

Welcome to the Confessions of a Crazy Parrot Person! I have been around birds most of my life and I have to admit, parrot people can be lunatics—but in a good way, they're passionate and compassionate, they relate to each other and understand their peers. I have been in other animal "circles" but I have never enjoyed them as much as the parrot crazies, our companion animals have taught us well.

We share our lives with these remarkable souls that engage us, inspire us, alter our moods, and inevitably—make us who we really are. Life with a companion parrot is rich, nurturing, loud, but most of all—fulfilling. 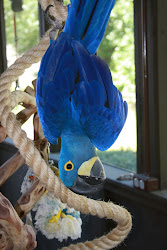 My avian best friend...I love her beyond words. 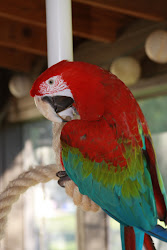 The other macaw that I adore... Miss Blaze.

Quote for The Crazies... 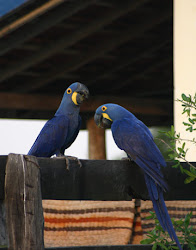 Friends Along the Way